A Scots police officer who single-handedly tackled a murderer in a supermarket car park has been honoured for his bravery.

Ross Falconer had gone to Tesco in Peebles during his shift in the Scottish Borders town when he came across a couple arguing on August 6, 2017.

Just seconds later, the officer, who was an Acting Police Sergeant at the time, heard a radio message stating there had been a vicious stabbing in the nearby Cuddyside area.

The 39-year-old quickly realised that the man in front of him, Nicholas Rogers, 28, was connected to the incident and was attempting to flee the scene using his girlfriend’s car. 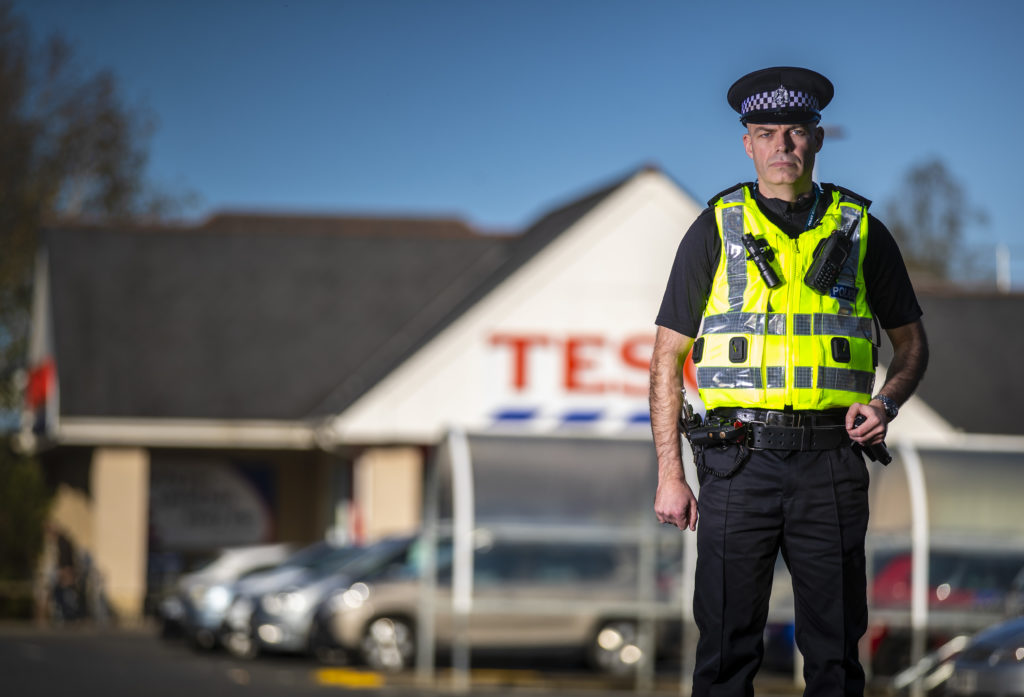 Constable Ross Falconer at the scene in Peebles.

Despite not knowing if Rogers was still armed and with the nearest backup unit being 20 minutes away, Constable Falconer swiftly attempted to handcuff the man.

A struggle ensued, with Rogers repeatedly threatening to kill the officer, but he managed to get the intoxicated man under control.

Tragically, Alex Stuart, 22, sustained serious injuries during the earlier knife attack and passed away in hospital.

Constable Falconer was named the overall winner at the 5th Annual Scottish Police Federation Bravery Awards, which is sponsored by Police Mutual, on November 28.

The father-of-two said: “It was completely coincidental that I happened to have gone to buy a bottle of juice at the exact moment that this male was at Tesco.

“It was really just a case of me being in the right place at the right time. At that point, I didn’t know if the male was still in possession of a knife.

“His intention was to escape the police which was clear from the messages he had sent his girlfriend.

“If he had managed to drive away, there would have been a serious manhunt for a very dangerous individual which could’ve gone on for a long time and put members of the public and police officers at extreme risk.

“The next nearest unit to me was in Galashiels which is about a 20 to 25 minute drive away.

“My concern at the time was that the male was armed and he may attempt to stab either myself or someone else. I tried to speak to him however he was extremely aggressive.

“I managed to get one hand cuffed but at that time, he was able to grab hold of me by the top of my vest and began to struggle with me.

“He tried to take me towards the ground.  “I had activated my emergency button on my radio and unbeknown to me at the time, my two colleagues had diverted from the stabbing and came to assist me.

“I managed to secure the male in handcuffs and a few seconds later I heard the sirens as my colleagues drove into the car park, much to my relief.”

The father-of-two added: “I made the decision to approach the male and handcuff him because it’s my duty as a police officer to protect the public.

“I knew there were possibly significant risk to myself however I felt that my duty, my responsibility, as an officer outweighs any risk to myself.

“I’m not ashamed to admit that I was very scared in that situation but there was no alternative.

“I am a dad myself and I did meet the victim’s family very briefly after the incident and I saw what an effect it had had on them.

“I’d hate to think of myself in that situation, it must’ve been horrific, obviously for Alex but also for her whole family.

“It also had quite an effect on the wider community here in Peebles.” 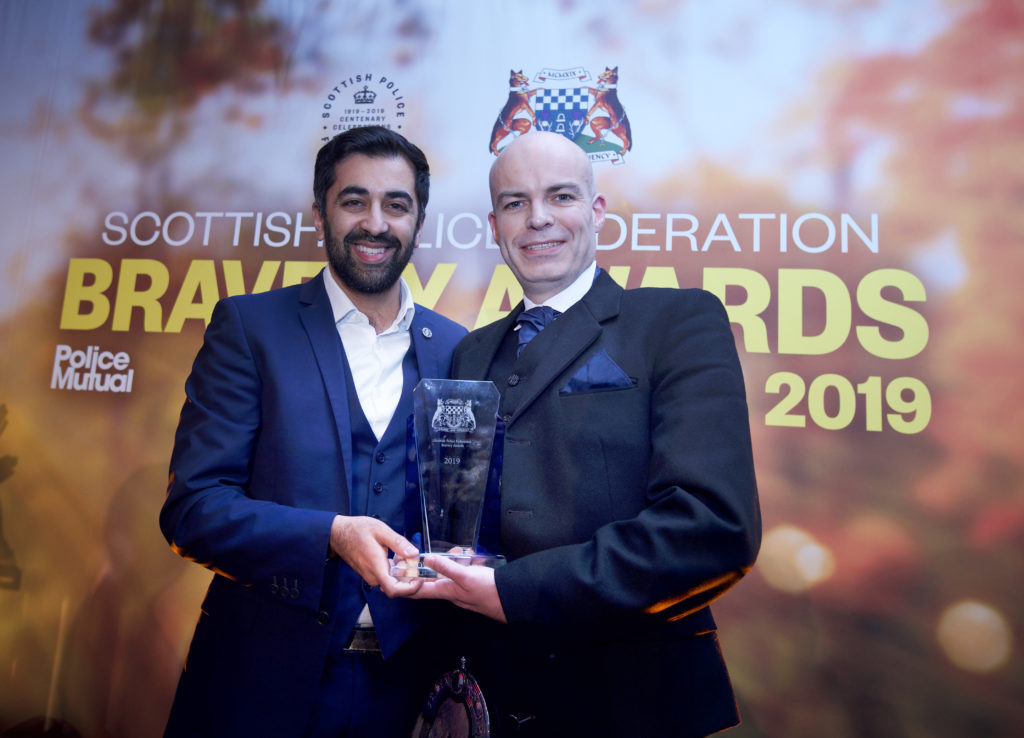 The Cabinet Secretary for Justice, Humza Yousaf MSP, said: “My thoughts are with the family of Alex Stuart who died during an incident in Peebles.

“Unfortunately police officers face this kind of violence and risk in the course of protecting the public, but they all show tremendous courage in dealing with it professionally.

“Their thoughts are often not of their own safety but to keep communities safe and help people in times of danger and distress.

“These awards are an important way to commend the actions of officers who have gone above and beyond the call of duty.

“Each incident is an example of the professionalism and dedication I see throughout Police Scotland.

“I am grateful for the efforts of all the officers involved.”

Andrea MacDonald, chair of the Scottish Police Federation, added: “All the winners this year are a credit to the service and it was my privilege to thank them for their heroic actions, on behalf of their colleagues, families, friends and the general public.

“Much has changed in Scotland’s policing landscape in recent times with new and unprecedented challenges facing officers on a daily basis. 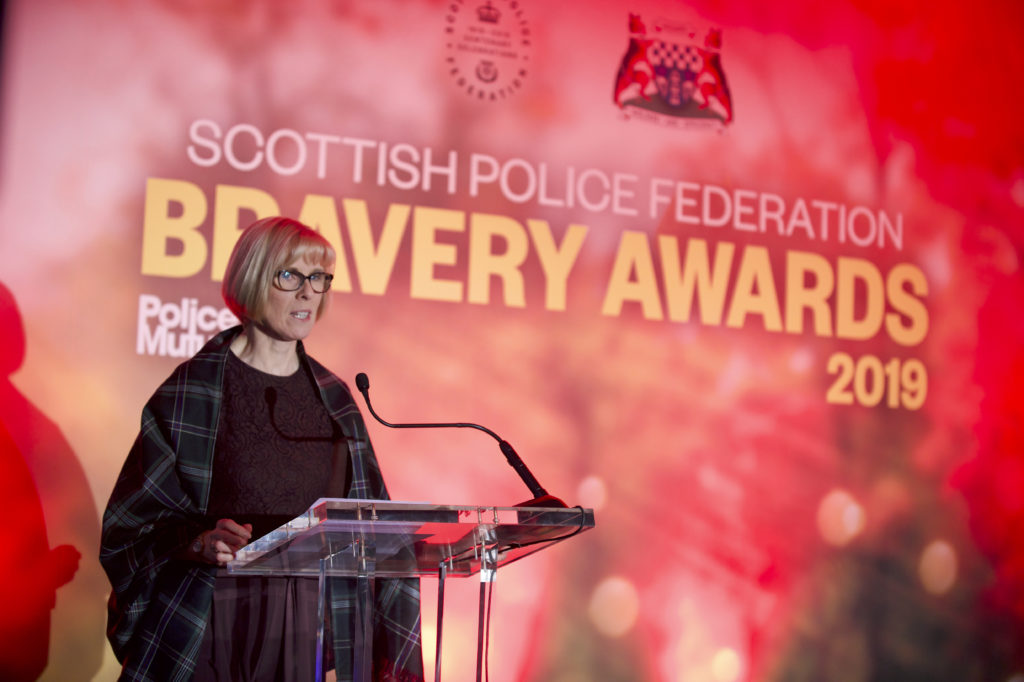 “But what remains the same is the dedication and bravery of the men and women who put on their uniform every day and go out to do their duty, keeping the citizens of Scotland safe.

“The desire to protect and service the public, often in exceptional circumstances, continues to be at the forefront of everything we do.”

Other SPF Bravery Award winners were: 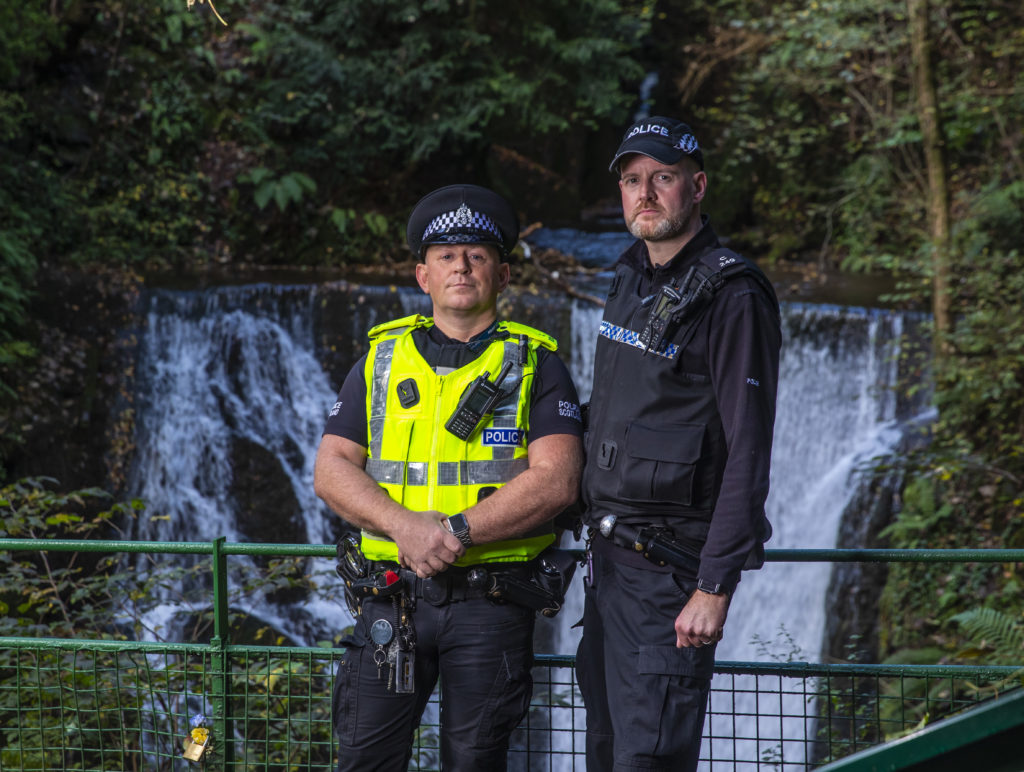 Constables Bob Gittins, 42, and Scott Campbell, 44, who rescued a seven-year-old autistic child after he fell into a river at the bottom of a 60ft gorge in Alva, Clackmannanshire, on May 12, 2018.

The duo made their way into the steep gorge using roots and branches to stop themselves falling in before spending around two hours comforting the young child. 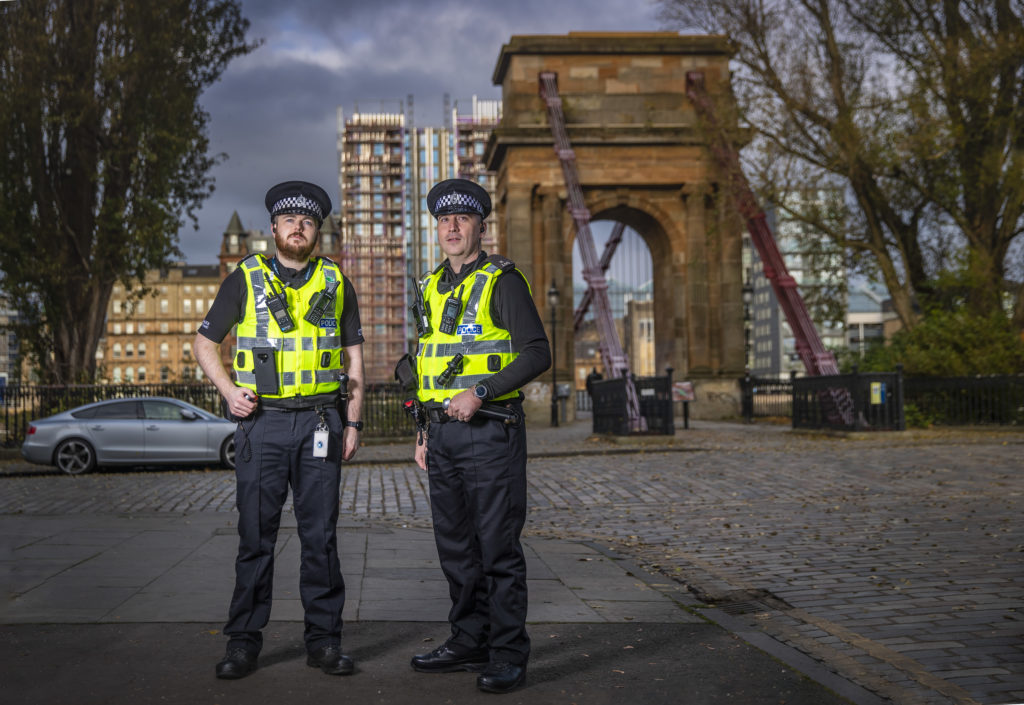 Constables Steven McDonald, 33, and Bryan Cochran, 42, who apprehended a teenager with a knife despite one of the officers being stabbed in the chest during the struggle.

The plain-clothed officers were walking to Glasgow Sheriff Court on January 17, 2019, when they noticed a group of people acting strangely near a parked car. 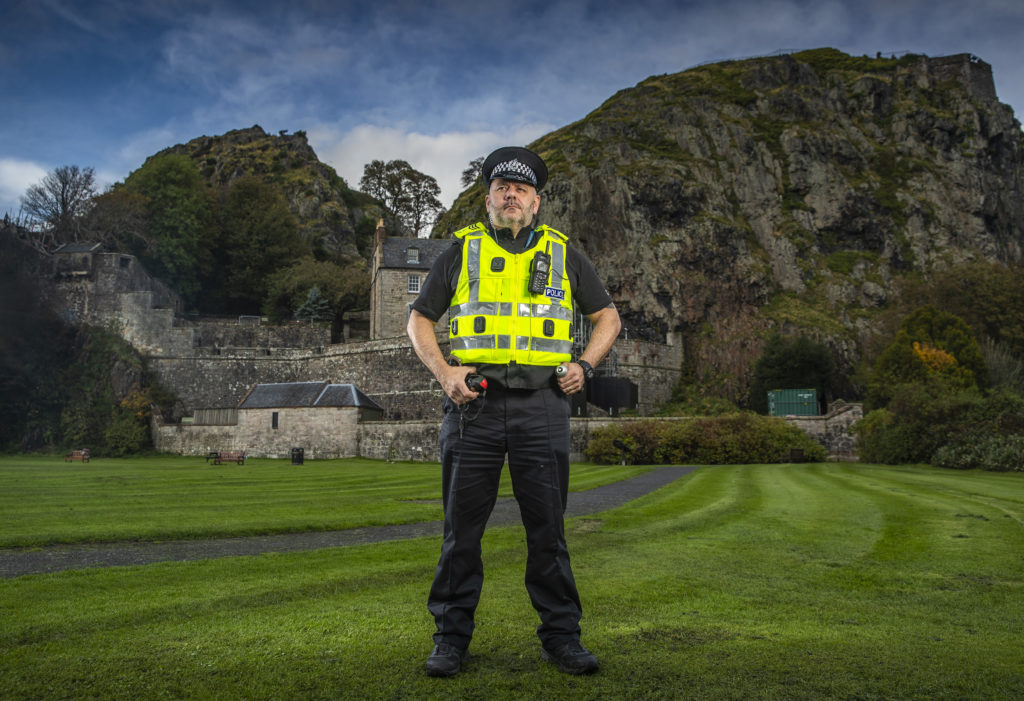 Sergeant Brian Simpson, 45, who came face to face with a machete wielding man on a residential street in Dumbarton.

The officer was the victim of the attempted murder after he went to the scene following reports of a suspicious male who had been seen hanging around on September 20, 2018. 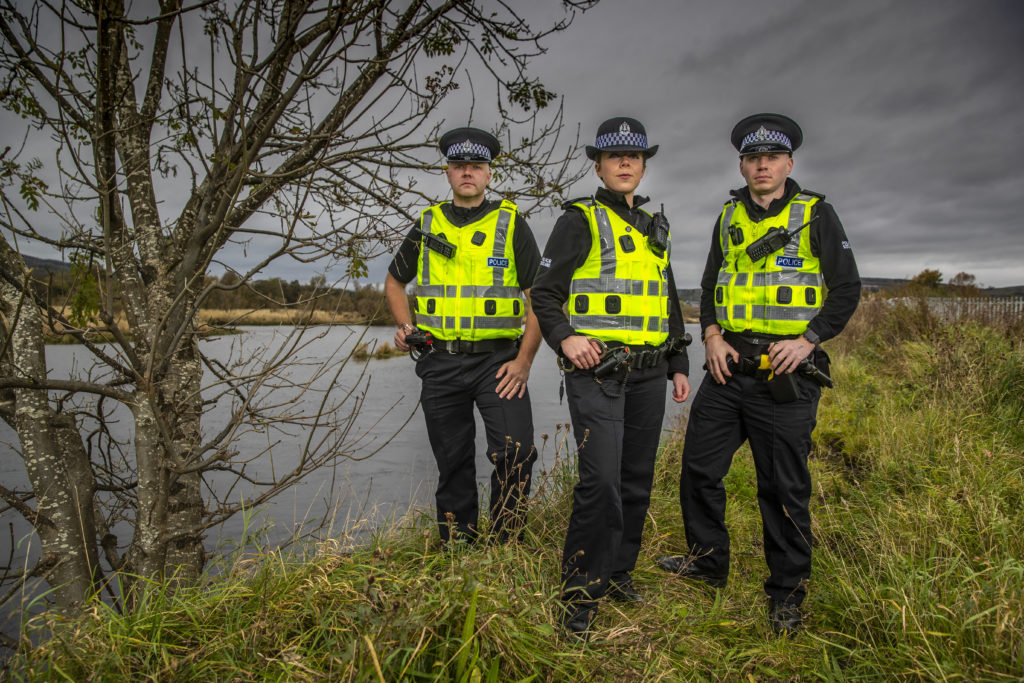 Sergeant Andrew Walls, 39, Constables Niamh Hughes, 25, and Craig Grant, 30, formed a human chain to rescue a woman who had fallen into the freezing River Leven in Dumbarton.

The officers were called to the scene at around 11pm on March 29, 2019, and found the exhausted woman almost completely submerged. 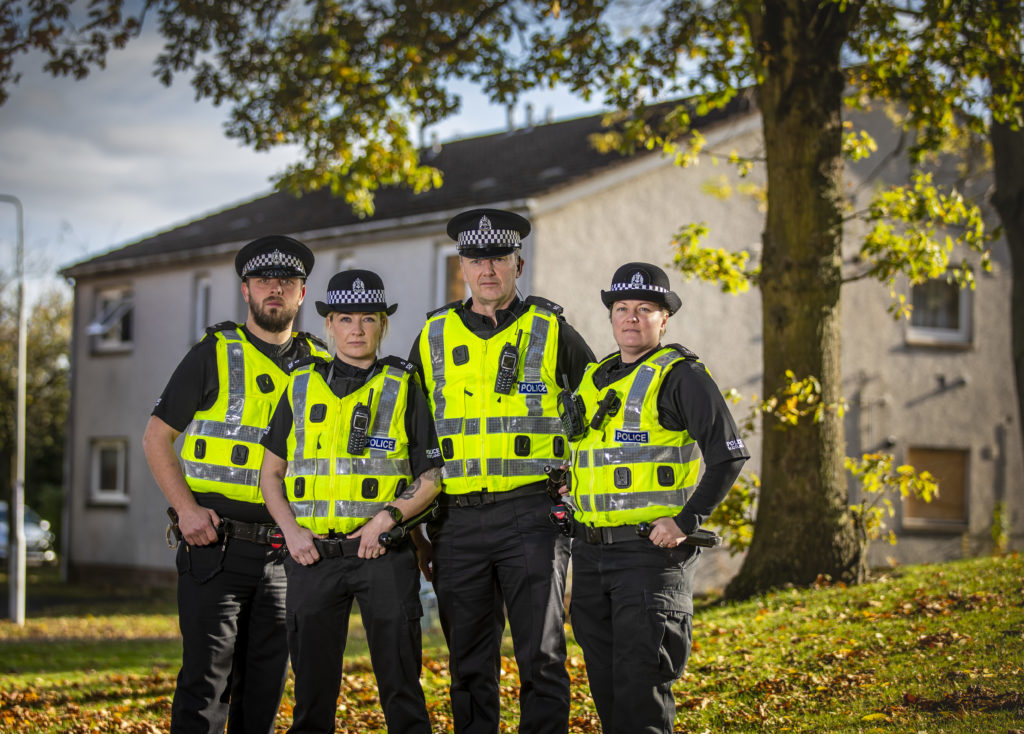 Four officers broke down a door to save the life of a heavily-pregnant woman who had been stabbed in the neck by her partner in Glenrothes, Fife.

Constables Paul Stather, 32, Sarah Hay, 33, Ashliegh Archer, 36, and Andrew Gillies, 51, apprehended the man, who was known for violence, and administered first aid to the woman on February 23, 2019. 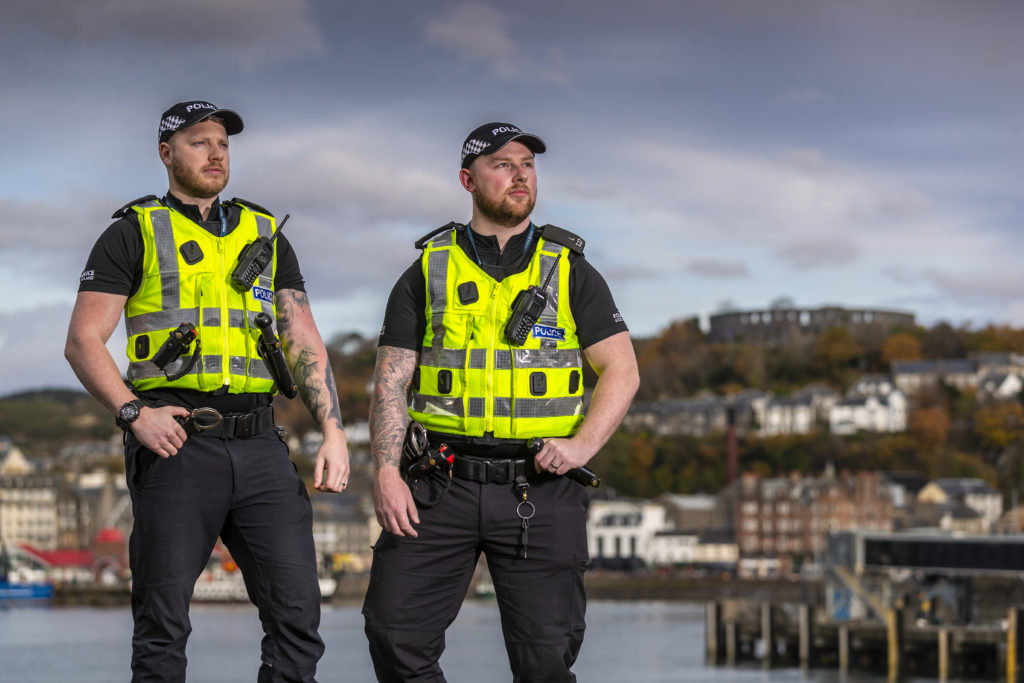 Constables Shaun Conway, 27, and Scott Deakin, 31, were called to reports of a man stabbing himself in the neck at a property in Oban, Argyll and Bute, on March 3, 2019.

When they arrived, they found the heavily armed man threatening to throw himself out of a third floor flat window. As he tried to jump, they grabbed hold of him and saved his life. 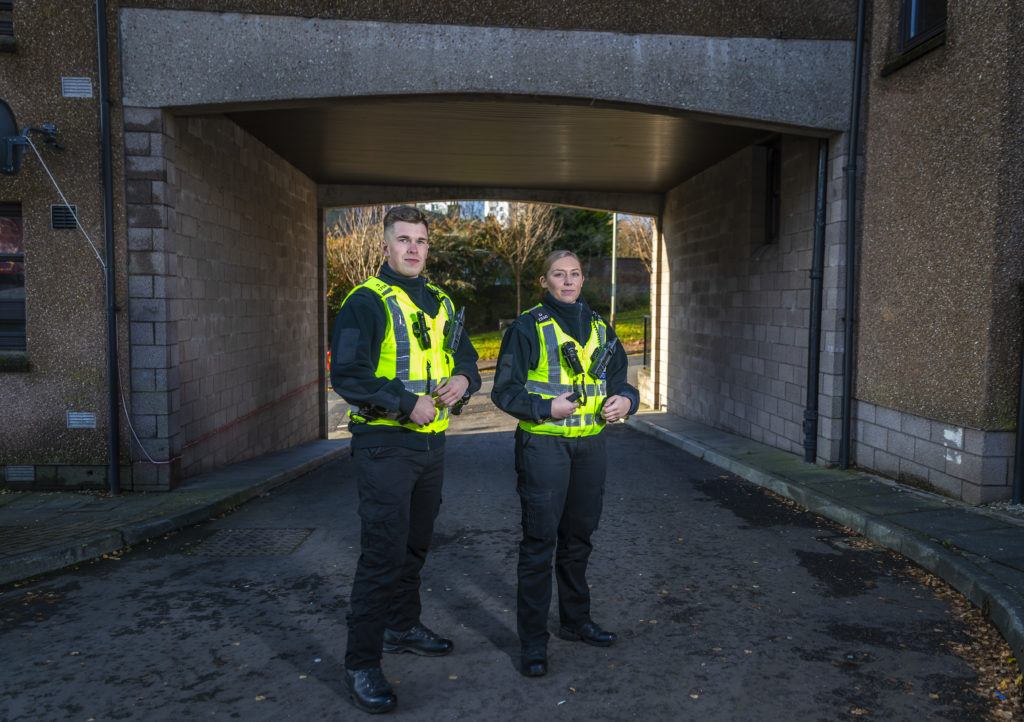 Constables Lee Ford-Logie, 25, and Shaunni Morris, 25, were called to reports of an armed man in the Hilltown area of Dundee on June 30, 2018.

They found the heavily intoxicated man, who was armed with a lead pipe, and attempted to engage with him before he assaulted Constable Ford-Logie and sprayed him with CS spray. 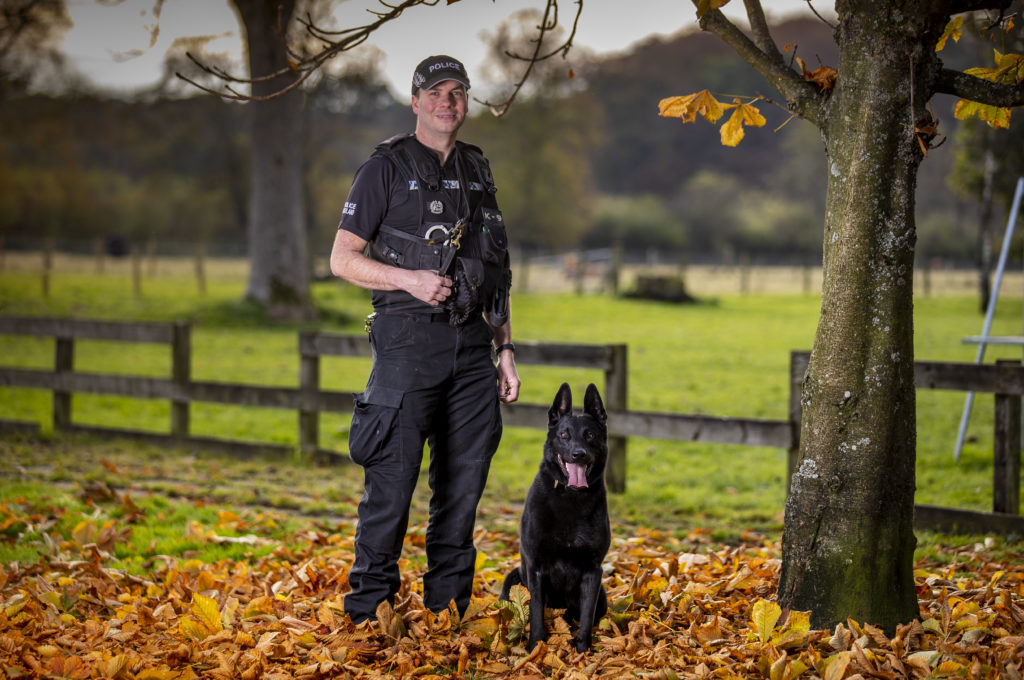 The Scottish Police Federation Centenary Award was given to Constable Paul O’Donnell, 43, and police dog Remo who were badly assaulted by a violent domestic abuser.

The duo were called to an industrial estate in Kilwinning, North Ayrshire, on March 26, 2019, and quickly found the man hiding in the bushes.

The man went on to assault Remo and his handler with an iron bar before biting the dog’s ear. Despite their injuries, the man was successfully detained and arrested.