Three retired police officers are set to tackle a mammoth 500 mile cycling challenge in memory of a colleague who was killed in the line of duty.

The trio decided to mark the 25th anniversary of Lewis Fulton’s death by raising funds for a lifeline charity that was co-founded by his widow Christine.

The dedicated officers will mount their bikes in Inverness on Tuesday May 7 before taking on the East Coast 500.

Funds raised from the challenge, which has been dubbed the Fulton500, will be given to the Care of Police Survivors (Cops) charity which supports families who have lost a uniformed loved one.

Police constable Lewis Fulton, 28, died after being stabbed in the Gorbals area of Glasgow in June 1994 whilst responding to an emergency call.

He was rushed to hospital but was tragically pronounced dead a short time later, leaving behind his wife and then seven-month-old son Luke. 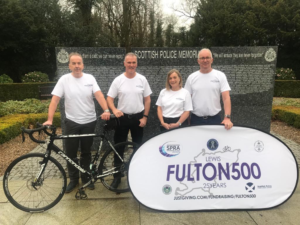 Wife Christine, of Kilmarnock, East Ayrshire, said: “The guys had been planning to do something as they’ve all retired fairly recently and I think they wanted to do something major to mark that.

“They came across this idea and wanted to raise funds for Care of Police Survivors.

“Then they realised that this would be the 25th anniversary of Lewis’s death and decided that they wanted to do it in his honour.

“Alan Gall contacted me and asked if he could meet with me to find out more about Cops and then it was when he was sat down face to face, he said that actually what they really wanted to do was to do it in memory of Lewis.

“They’re absolutely loving the training. They’ve been out in some horrendous weather so the last couple of weeks have been a bit of a relief for them.

“I’m going to Inverness to wave them off. I’ll be there on the Tuesday morning.”

The 59-year-old added: “It’s really nice because none of them actually knew Lewis.

“I think it is just so special because as serving police officers, Lewis’s death affected them. It affected them all.

“It just means so much that while one officer is hurt, but the whole police family feels it.

“It really just means so much to me that 25 years on, Lewis hasn’t been forgotten.” 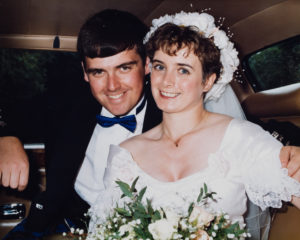 Lewis Fulton and wife Christine on their wedding day in 1992.

Speaking about her husband’s death, Christine, who was awarded an MBE for her work with the Cops charity, said: “It never leaves you. You have ups and downs.

“In the beginning it was really tough and then it settled into a sort of level plane.

“Luke starting school and all his milestones, Lewis missed all those. He’s recently graduated from university and not having Lewis there was tough. But he would be so proud.”