A vicious thug who smashed a police officer and his dog in the face with a metal bar before sinking his teeth into the animal’s ear has been jailed for two years.

Jamie O’Neill appeared at Kilmarnock Sheriff Court on Friday where he was also told he will also be supervised for 12 months following his release from prison.

The 33-year-old previously admitted attacking PC Paul O’Donnell and police dog Remo with the offensive weapon after he was pursued by the duo in Ayrshire on March 26 this year.

O’Neill, who is originally from the Brighton area of England, was running from the police after assaulting his former partner and throwing a brick through the window of a property.

After being caught at the Nethermains Industrial Estate in Kilwinning, O’Neill launched his violent attack which left the officer needing hospital treatment. 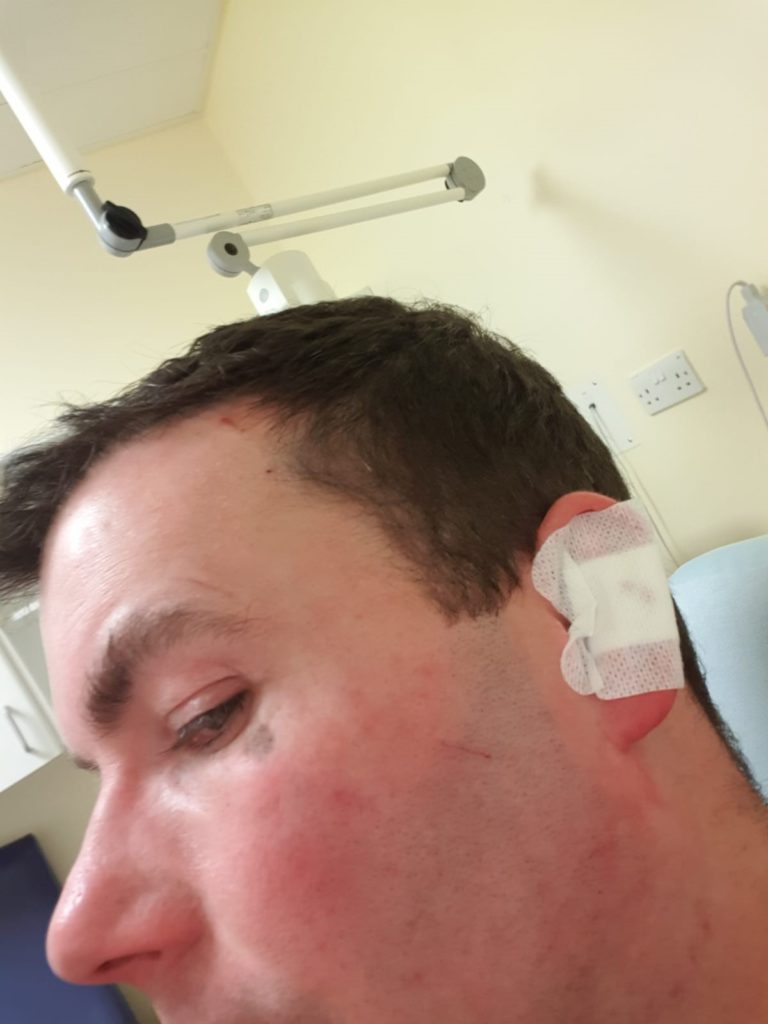 Police dog Remo, a five-year-old Belgian Malinois cross, had to undergo root canal surgery on his canine tooth which was eventually capped with a £4000 titanium implant.

The brave hound also had stitches put in his ear after O’Neill ripped a chunk out of it with his teeth.

The court was told that O’Neill had been in and out of prison since he was 16-years-old and had moved to Scotland to “get a break” from his peer group in England.

His defence solicitor, Mr Connolly, added: “Valium was at the background of this offending behaviour on this particular date.”

The lawyer said his client, who is said to be “extremely ashamed” of his “impulsive and reckless behaviour”, plans to move back to Brighton following his release from prison.

Sheriff Elizabeth McFarlane said: “The sentence that I am going to impose is one that is inevitable because of your appalling behaviour on the 26th of March this year.

“I see no alternative but to send you to prison.”

PD Remo’s ear after the attack.

O’Neill’s 24 month sentence was back dated to March 27 when he was first remanded in custody at HMP Kilmarnock.

Speaking about the horrifying  incident, PC Paul O’Donnell 42, said: “I found O’Neill and he was shouting and bawling before trying to make off through the bushes.

“I sent Remo to stop him and when he was only about 10ft away Remo jumped for him.

“O’Neill had a metal bar behind his back and he’s swung it round and smashed Remo in the face which did all the damage.

“Remo then kind of backed off and started barking. I’ve then put hands on O’Neill to try and detain him, he started fighting with me and Remo has seen this and grabbed him by the calf.

“O’Neill then just folded over, grabbed hold of Remo’s head and sunk his teeth into the dog’s ear.

“But the reality is that if you bite a police dog, all that’s going to happen is he’s going to bite you even harder.”

The dog handler continued: “The damage was a bad wound to the centre of his ear and at the edge of the ear, a nick was taken out of it where the guy’s tooth has ripped a part of it off.

“All I could I see was the blood pouring out of Remo’s ear. At first, I didn’t know I had been hit in the face with the bar.

“A traffic cop that was following me told me to put my hand to my face and there was blood pouring down my face.

“Because of the adrenaline and worrying about Remo, I just didn’t realise.

“My main concern was to get Remo to the vet in East Kilbride and it was only when we were halfway there that my concussion started to set in. 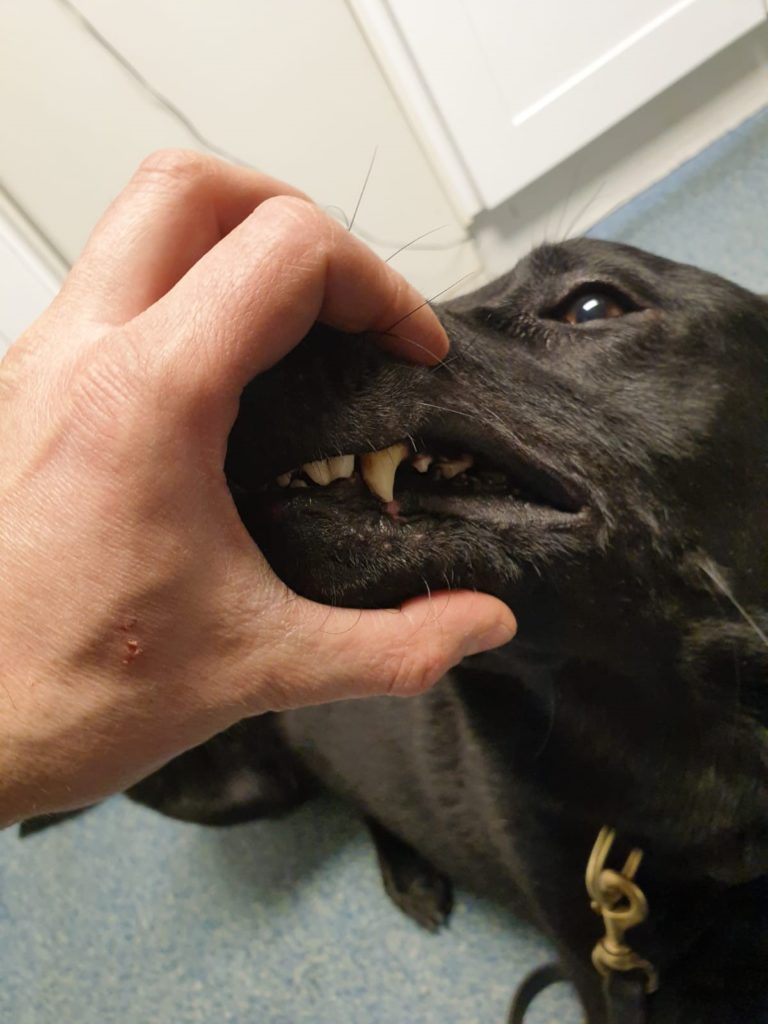 “It’s not the kind of incident you expect to come across on a Tuesday afternoon but you never really know what you’re going to come up against.

“Any other member of the public would go ballistic if someone smashed their dog in the face but we have to be professional and make sure we get the arrest to keep the public safe.

“Remo lost about a third of his tooth during the incident. They did root canal surgery on the remaining tooth to save it and then tapered it down to fit the titanium crown.

“There’s still a good centimetre difference in size because obviously they couldn’t make it into a nice, pointy tooth. They’ve capped it off and it’s done the job.” 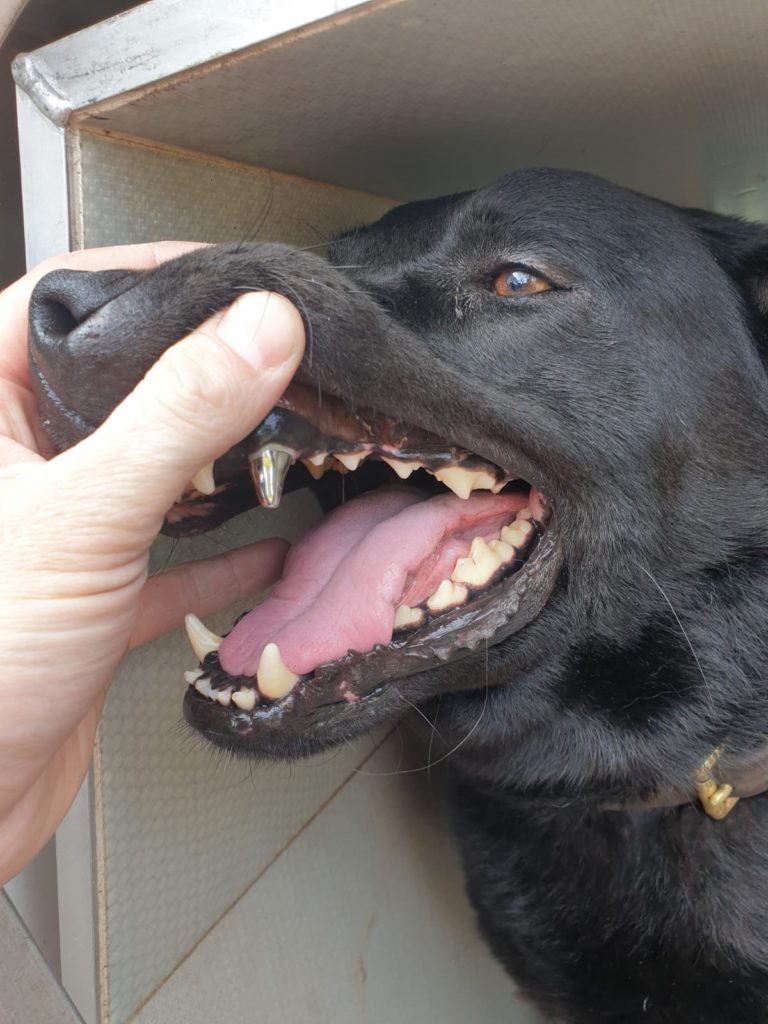 “Say if we go to meet someone, he’ll be lying on his back getting his belly rubbed. He’s the friendliest dog you’ll ever meet.

“But what people forget is that when he goes into work mode, he’s an absolute machine.

“To me, he’s perfect. He’s a great dog to have about and I obviously know he has my back.”